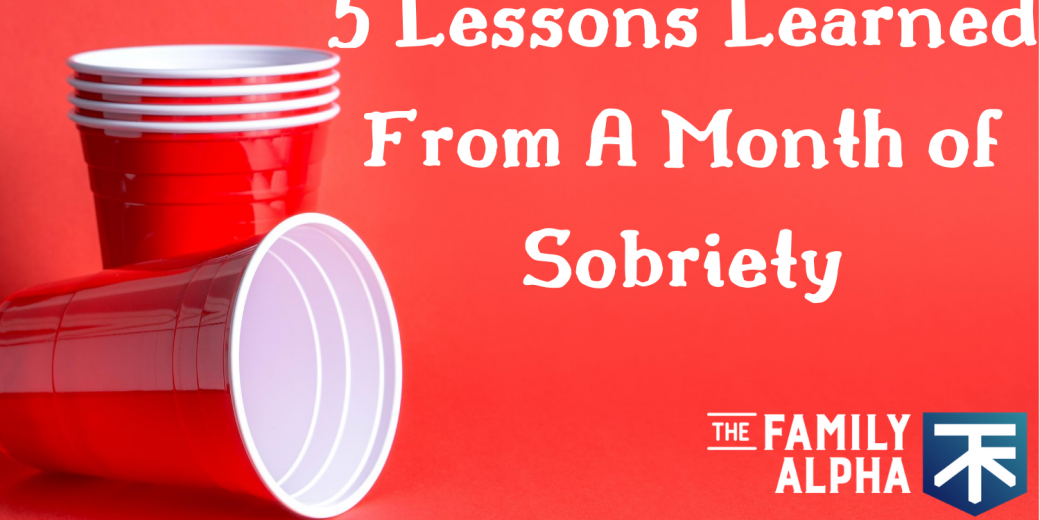 5 Lessons from 1 Month Without Alcohol

It’s been over 31 days since I’ve had a drop of alcohol and as I go through this journey I figured I’d share some lessons learned along the way.

My first piece on the subject was dropped when I shared that I’d “Fired My Drug Dealer” and now that I’m hitting certain milestones of sobriety (1 month, 3 months, 6 months, 1 year) it’s going to be a little further between my “Sober Monologues“.

Let’s get into 5 lessons I’ve learned in the past 31 days:

Sobriety is not a personality trait.

No matter how important the move to sobriety has been to you, you have to keep it from consuming who you are as an individual.

The same goes for booze.

Now, I understand that doesn’t make much sense considering the context of this piece. so let me explain:

I’m sharing my journey on here for you, not me.

I don’t really talk to friends or family about not drinking with the exception of when they start asking me questions about it.

This is not my favorite subject and while I’m proud of my resolve, it’s for me and not the world.

I’m not judging others at parties, I’m not preaching the ailments of booze in person; I’m keeping my journey and opinion reserved for when others broach the subject or online in an effort to potentially help others who may be struggling with addiction.

My sobriety defines me no more than my decision to eat meat or ride mountain bikes with my kids, it’s a part of the journey, not the defining purpose of the journey itself.

No two journeys to sobriety will be the same.

Everyone thinks their way is the way because they’ve found success with it.

The truth is, coming to the point of choosing to live a sober life is a very personal journey and for some, it requires being hit in the face with a 2×4 of tough love, others it’s legal issues, and there’s even groups of people out there who out of nowhere said, “I’m good“.

There’s this stigma people have with alcohol that makes them assume, something really bad happened and caused you to “have to quit“.

I’ve faced it a few times and assume I will forever; people can’t wrap their head around the fact that it isn’t me not being able to drink alcohol, but rather me not wanting to drink alcohol.

It’s been cool to read the many stories people share online about how they came to their conclusions that alcohol was no good for them.

For some, I am way better off with my starting point.

For others, I let this slide way too long compared to them.

At the end of the day, it doesn’t matter; what got you to where you are is all you have to work with, there is no hierarchy of sober individuals.

Alcohol brings nothing positive into your life.

This legitimately blew my mind.

I was a binge drinker for 20 years and if you were to ask me 32 days ago why I drank alcohol, I’d likely have had a list.

If you asked me 31 days ago, when I had my moment of Spontaneous Sobriety, I’d have given you the answer I have right now: Nothing.

Alcohol does nothing positive for you and I’ll directly address a few of the common retorts to that stance:

Alcohol literally is a net negative on all aspects of life; there’s a reason it tastes like shit and makes you sick.

Again, I am not coming at this from a position of being “holier than thou“; these are objective assessments of self and the product of alcohol, there is nothing I’ve found of benefit which could not be attained elsewhere, through less destructive means.

Nobody cares or is as impressed as you want them to be.

That was it; no parade, no confetti, no presents or fancy hats.

Nor should there have been, I’m 33 years old and finally unfucked my reliance on alcohol. It’s past time I acted like an adult who was no longer a slave to the heavily processed and marketed liquid poison.

With that said, other addicts get it.

The gents inside my private Telegram 365 to Sobriety are rooting for me and I for them.

The only people who are going to get what it is you’re going through are others who’ve been in the trenches of recovery and sober living.

This is one of the reasons I believe community is so important; going at this alone can suck and at times leave you feeling isolated and unable to relate to others. As I’ve said before my getting to know and meet Ed Latimore played a large role in this decision.

I met him years ago and here we are, him closing in on 7 years and me wrapping up month one. But the seed was planted then, I saw a man who was an online self-made man who was able to mix it up with the gents, be social, and be sober; that stuck with me.

It’s possible to go sober without cravings or withdrawals.

I really thought the decision to quit and deal with the physical and mental effects of removing alcohol was going to suck.

One of the reasons I think that was the case is because I’d reduced 90% of my consumption of alcohol after working with Phil Foster.

The other part of the equation is that this is the first time I told myself, I’m never drinking again and it’s as though my mind went, “Alright, turn that part of the brain off, we’re shutting the drinking factory down for good” and all power to that region was secured.

In my many previous attempts at sobriety, my aim was to reach responsible drinking or moderation (whatever that means).

There were all bullshit excuses that allowed me an escape and because I had an out, I’d eventually go back to drinking.

I’ve burned my ships on the shore, there is no retreat; I’m done and I’m going to live out the rest of my days without alcohol and I’m cool with that.

I’m sure I’ll learn more as the journey continues, but I hope these five pieces of advice help you if you’re on your journey or if you’re considering joining me and if you are, shoot me a DM on Twitter or Instagram, I’m always open for a chat with others who are looking to reclaim control over their lives.

If you’d like to support the work I’m doing you may do so below (Thanks in advance):