A String & Some Polaroids 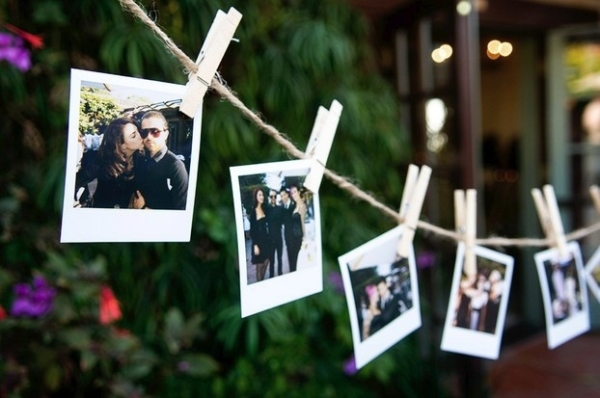 Your entire life is nothing more than a string with some Polaroids hanging from it.

This past weekend IÂ hiked a portion of the Appalachian Trail with a few buddies from my first deployment. As anyone who has gone camping with friends can tell you, eventually the subjects of conversation reach that â€˜next levelâ€™ where things get deep.

I had been touching on the surface of The Family Alpha with them, just dropping a few bread crumbs about how I felt in regards to masculinity and the role manly men play in our society when one of the guys said, â€œYou have an interesting view on life, Iâ€™d like to hear what you think the point of it all is…â€

The following is an attempt at revisiting that answer and letting you get a different viewÂ on this life. Ultimately my goal is to give you a new perspective and mental tool to use in your decision making process in this life, a tool that can help you live a life of no regrets.

The Point Of It All According toÂ Hunter Drew

The way I look at it is like this:

When you are born your life (aÂ string) is wrapped around a nail that is sticking out of the wall and with each passing minute, like the time that ticks awayÂ while you read this post,Â it grows as it is unwound from a spool with a predetermined length of string.

You don’t know how much string you have andÂ neither do I.

As you age, you have Polaroids clipped onto that string.

In the beginning there are so many that they often overlap; your first words, learning your colors, etc. All of these first memories of your life are your first Polaroids. As we age a gap begins to grow between those photos. The moments of your life begin to space out as each experience is no longer as new nor are they as profound.

This is whereÂ the divide between those who live a full life and those donâ€™t can be found.

It’sÂ also at this pointÂ where the authentic man separates himself from his conformist counterparts.

You see, the authentic man is always hanging Polaroids.

He views each day to be an opportunity to achieve something. Each day is a new life, where his awakening is his birth and he knows that sleeping that night will be his death.

So he does all he can to set his next life up for success and to own the opportunity he has been given in this day.

When people have “near death” experiences, they always say their life flashed before their eyes. Do you know whatâ€™s happening when that’s going on inside their mind?

Their soul is flying along that string and the Polaroids are zipping by as it does. You want to be the guy whose mind has to fly past a lot of photos.

The authentic man creates purpose with his time and exercises discipline the moment he opens his eyes. He wakes up early and gets out of bed instead of listening to the voice that tells him to remain under the warm blanket. Walking from his bed, shaking the sleep from his mind he sees whatever his goal is. Maybe he rises early to lift weights and when he grabs that bar a Polaroid is hung. Heâ€™ll remember the time he exercised his discipline and once again went to service at the Iron Temple.

Maybe he rises early to write more for his book, to do some schoolwork, or hit the pavement and log some miles; each of those actions is a Polaroid being hung. Those moments come from existing in the moment.

The decision to take action and be in the moment aren’t as common as they should be. Iâ€™ll use a real example shared by a friend of mine around the campfire.

He was driving cross country a few years ago and during his road trip he knew he would be driving past the Grand Canyon. The detour to see the canyon would add 3 hours to his voyage, but there was no deadline to reaching his destination. He decided to pass on the opportunity and figured he would see it some other time, possibly on his drive back.

It has been 5 years, he has yet to see the Grand Canyon and he regrets the decision to not do so when he had the opportunity; he missed the chanceÂ to hang a Polaroid on his lifeline.

Gentlemen, thatâ€™s what the point of this life is, choosing to see the Grand Canyon; choosing to take that action, wake up earlier, go on those trips, practice forced discomfort, and live in each and every moment.

Growing older is a privilege which has been denied to many.

Tomorrow is not guaranteed and the privilege you have to grow older is one that has been denied to many. Instead of making my friend feel bad for choosing not to see the Grand Canyon I told him to view it as his Tipping Point. I want him to look back to that gap on his lifeline, that missing Polaroid and use that void as a reference point when making other decisions.

When you choose to stay in bed, you miss a chance to live.

As the gaps grow you become dead on the inside, that passionate flame for life dwindles

You find excuse after excuse to not:

Your string will reach itâ€™s end and when it does, youâ€™ll look back at the gaps and regret the time you wasted while others lived.

Acta, Non VerbaÂ it’s our motto around here, so take action brothers, donâ€™t just talk about it or type it online; take real, physical actions as the window of opportunity is closing with each breathe you take.

This piece is neither about sexual strategy nor is it really about improving yourself, itâ€™s aboutÂ living an optimal life, one without regret.

Too few people are actually living; most are simply consuming.

Consuming material products, consuming ads, consuming attention; getting 30 likes on Facebook does not provide you with a Polaroids. Being overweight, being bogged down by ego, and being an individual who refuses to leave the comfort zone prevents you from getting any Polaroids.

You have to live this life as a genuine person and seize each and every day.

I want you to get everything you can from your time on this spinning rock called Earth, I truly do. So please, after reading this, go do somethingÂ that youâ€™ve been putting off and feel how good it is to take an action and live in the moment; then, do it again.

Do something that youâ€™ve said you were going to do for the past week, month, or year. Give yourself the gift of creating a day you’ll remember for more than 72 hours.

You Need Real Friends In The Real World

Learning How to Relax

America Is Only The “Land of the Free”, If You Choose to Live Free

There is a war being waged against masculinity. Men are suffering in silence, going to their grave without ever experiencing the joy of living a genuine life. I write to help those men find a way to live again.

Please log in again. The login page will open in a new tab. After logging in you can close it and return to this page.