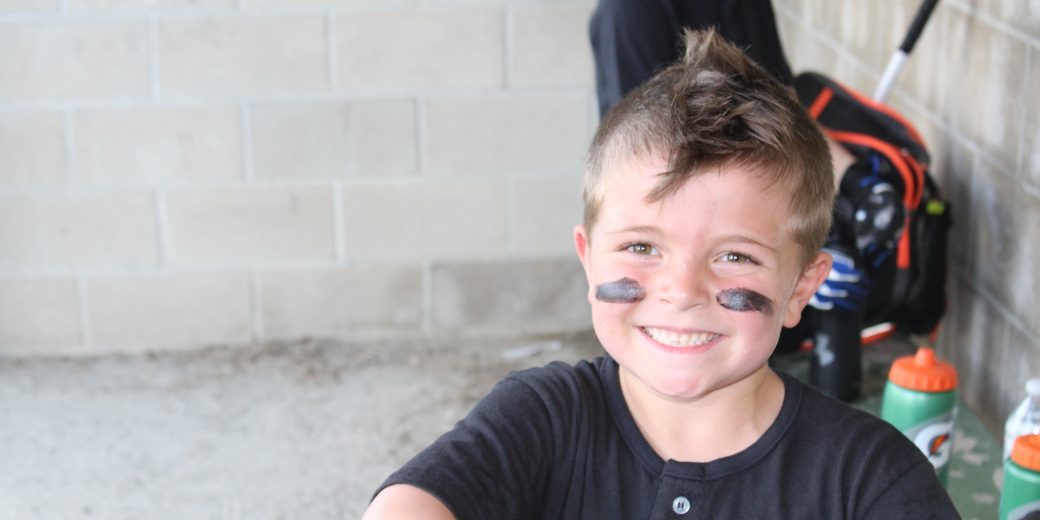 This year is the first year my son has played “real” baseball. I put real in quotes because he played last year, but the first half of the year was coach pitch, not player.

It has been an amazing opportunity to coach him and a year which you can see him and I sharing moments we’d otherwise not have had.

We’ve both grown significantly from this and I’d like to share a few of those insights as well as humble-brag a little about my boy.

My son makes the cutoff for this league by literally one day. He is the youngest (7) kid as well as the smallest, but he’s got the heart of a lion.

I always pay particular attention to how I interact with him regarding his interests. I let him dictate where he chooses to spend his time, the last thing I ever want to do is live vicariously through him like I see some fathers doing.

He decides the sports, the hobbies, etc. I support as best I can. The only time I’ve inserted myself was when I got him to switch from football to baseball full-time. My Master’s is in Exercise Science, I’ve written too many papers on concussions and sub-concussive hits to let him play.

From the womb, baseball has been his thing. I’ve spent more hours playing catch, pitching, & running drills with him than I can possibly remember or count.

Some days I would open the door of the Jeep after getting home from work and before it closed behind me he’d say, “Hey dad, want to run drills?” and in my tie and slacks, we’d play Line Drive/Pop Fly/Grounder where I’d throw one of the three and yell it right as I did it to throw him off balance.

My wife would have to yell two or three times for us to get our ass in the house for dinner and even then, we we’re discussing what he did well and where he needed to practice a little more.

Our entire family has recognized his talent from a young age. They’d say things like, “This kid is going to be something special when he walks onto that field” but you never really know until it happens.

This was the first year he walked onto that field alone.

The guy I coach with is a solid dude and has become my best friend. His boy is also a natural at the sport, is left handed, so his boy and mine have become something of a dynamic duo at short stop and first base.

He Enters The Arena

For our first game he was our leadoff man.

I was first base coach.

I wanted to tell him it was a great cut and that he swung at a strike and not a ball which I would hope would be consolation.

I wanted to yell that he did his best.

I wanted to give him a bear hug and tell him that at least he is in the arena.

But this is life, he failed to make it this time and dad won’t always be there to make him feel better, he had to let this sink in and decide what he was going to do moving forward.

Because of this, I stood there at first base with my arms across my chest and watched my son walk to the dugout, starting his career with a glorious strikeout.

He struck out his next at bat and this time, I could see the chin quiver as he sat in the dugout. Tears filled his eyes, he refused to look at me across the field.

When our boys took the field for defense I ran to him and told him that he was swinging at strikes and that I was proud of him. He said he was frustrated with himself and felt he was letting the team down.

He was more worried about failing his team than losing the game or embarrassing himself.

My little man was placing his ‘brothers’ before himself, failing them was worse than getting lousy stats.

He rebounded after that game; it lit a fire in his soul.

Every day he is throwing a ball at the wall and catching it with his glove, pitching into the station I measured out and built in the backyard, or hitting off the tee into a net we have downstairs.

All of this is on top of team practice as well as his chores, workouts, modern Agoge sessions where he is learning philosophy, mathematics, reading and writing stories, etc.

He doesn’t tire of baseball and I support that.

The day he was called to pitch, my heart was in my throat.

Batting is one thing, he’s a good batter, a great defense-men (2nd base & Shortstop) but pitching?

This was his first time throwing at a kid on another team.

I couldn’t stop pacing as he warmed up.

Then the game started.

3 innings pitched (then he hit his max pitch count), 2 runs given up, 4 strikeouts.

He got the Win and the game ball.

This young and tiny kid can hang against kids much stronger and taller (some are 3 years older than him.)

He is carving out his place in the world. He is building his own reputation and while doing so, I am fading further and further into the shadows.

He still views me as his hero and he still loves to be tucked into his bed by my wife and I, but the days are limited so I’m immersing in every one.

As fathers, our job is not to view our sons as our chance to ‘do it again’, but rather, to make sure we teach them to do it right. To help them avoid the holes we fell into and to pass the knowledge to them which we wished we had at their age. Our boys should rise to heights we don’t even know exist and we should take pride in that.

I sacrifice my time for him, not in the hopes that he’ll make it to the MLB and I’ll get a kickback. I do it because he is my son, my blood, my heir.

He’ll never understand the sacrifices I’ve made to be his coach, to make time for backyard practice with him, or the money I’ve spent to get him gear instead of the extras I would like.

He will also never understand that the time I’ve shared with him I wouldn’t trade for a million dollars.

It is through America’s game that I have witnessed my son prove himself.

While I am running my Rite of Passage at home, it is when he turns failure into fuel for greater success that I see what I am doing is working.

We never know how we’re doing as parents, but there are moments where you look at your child and think, ‘You know what? This kid is alright‘.

Get involved with what your kids are doing. If my son wanted to build rockets, you’re damn right I’d have a launch pad in my backyard.

Your life is not about catering to their life, but you have to ensure that you aren’t placing consumption of television over interacting with your offspring. You need to make sure you are raising them and not a screen or society.

Their education, training, and the perspective with which they view the world is your responsibility.

This is your child; not the government’s.

Do not sit back and think that state schools and sports leagues are responsible for the development of your child. That is your burden to bare and you must bare it with pride and limitless reserves of motivation and energy.

Never forget; your children are going to follow your example, not your advice.