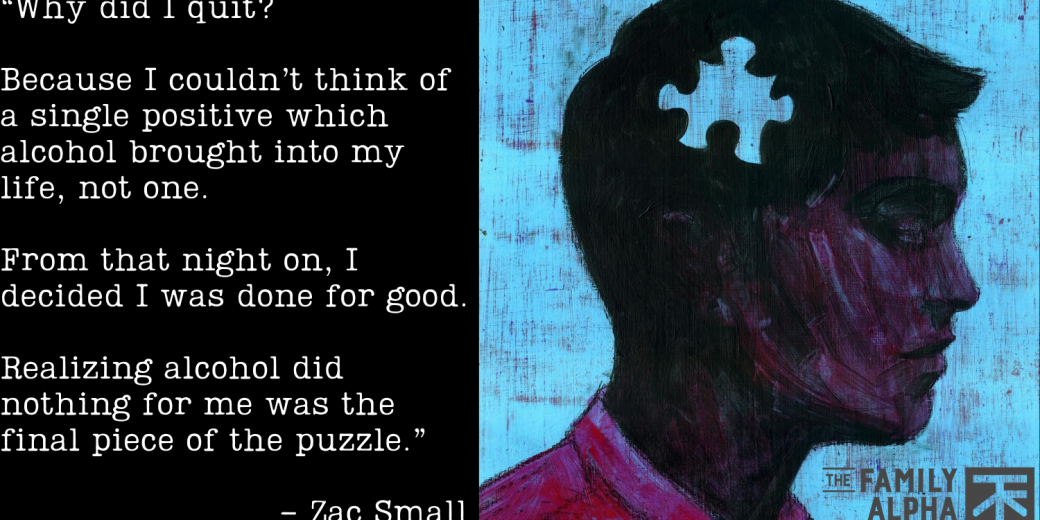 How I got sober without AA

There are many formal programs out there that are used to help people get and stay clean and sober; today I’m over 30 days without any of them.

After multiple attempts throughout the past 20 years of binge drinking, I’ve finally broken free from that voice within and below I’ll be sharing a few actions I took to make this possible.

I’m not knocking the formal programs that are out there, as anything which helps someone break an addiction deserves nothing but praise.

In this piece, I’m pitching the idea that maybe you don’t need to go to rehab, attend meetings, or follow any specific “Step Program” to reach your goal of breaking free from whatever vice has its claws in you.

Regardless of what people say, there is no “One Size Fits All” model when it comes to breaking free from the chains of any vice.

Is Addiction A Mental Health Issue?

There’s this prevalent myth that people addicted to alcohol are somehow genetically predisposed to getting hooked.

See how they did that?

It’s not the alcohol, it’s the person who has the problem.

While there is some legitimacy to genetics and the role it plays in a person’s potential for addiction, it’s more of a “how long does it take to get addicted” as opposed to will a person get addicted.

There’s nothing wrong with a person who does heroin and is then addicted to it, it’s an addictive drug that causes withdrawal symptoms almost immediately (from what I’ve read). You may be of questionable character for trying heroin, but nobody will say “it’s your genes that made you hooked” because clearly, it’s the drug.

The same goes for alcohol and this is why I refuse to call myself an alcoholic any longer and it’s also why I do not agree with the AA approach.

My identity is not, “Zac and I’m an alcoholic” I’m a normal dude who was hooked on booze, just like a majority of my fellow Americans…

Commercial, ads, and billboards tell us we need alcohol to have a good time and they’re everywhere and run all day long:

You aren’t a broken person because you’re addicted; you’re caught in the very well designed trap set by the alcoholic beverage companies that have been programming you since birth.

I was too, until I broke free.

Here are a few key steps I took which I believe played a role in my “Spontaneous Sobriety” which I will not be relapsing from:

I quit before something bad happened: I didn’t wake up from a blackout wondering how the night ended, I didn’t get a DUI, I didn’t find myself in a jail-cell after a drunken bar fight, and I didn’t have my wife threatening to divorce me if I didn’t clean up my act.

I didn’t have any of that.

I was sipping on some wine and I looked at my wife and told her, “I’m done after this, forever; this is the last night that we’ll drink together.“

I was sitting there, sore from working out, I’d eaten right, and there I was drinking calories and for what?

I removed the few good times alcohol provided and assessed the entire picture, alcohol is a net negative on every aspect of a person’s life:

This list is infinite and it’s not exclusive to me, there are many stories I’ve heard and read from people who’ve done much worse under the influence.

All of this is entirely preventable by not drinking.

I researched why I was able to be so productive in life, yet somehow struggled with controlling alcohol. When I had one alcoholic drink, my brain went into a frenzy which couldn’t be satisfied, it was always looking forward to “the next one” often times before I’d even finished the one that was still in my hand.

These books sealed it for me and if I had to pick one resource outside my personal stubbornness to give credit to my certainty that this will be a lifelong change it’s “This Naked Mind” and the way it made me disgusted with my relationship with booze..

The book made me angry with how well the alcoholic beverage companies had duped me.

I stopped blaming and labeling myself as an “alcoholic” and instead started blaming the liquid poison.

Alcohol is an addictive drug; except it’s processed to hell, has literally billions of dollars spent to market it as something we need in our lives in order to have fun, and the government has deemed it “legal” and in the case of Corona Quarantine, apparently liquor stores are also essential.

Alcohol tastes like shit, causes more problems than it solves, and is detrimental to human health; there’s nothing wrong with me for being addicted to an addictive drug, it’s literally designed to work like that.

Can You Be Social and Sober?

Ed Latimore is my mentor in this and not even a “Ghost Mentor” I straight up text him and told him what I was doing and asked if I could pick his brain as I walked this journey.

Him and I have shared stages, podcasts, guest posts, and collaborated on projects in the past, so he knew that when I committed to something, I was all in and I’m all in on remaining sober.

Something he taught me was, booze doesn’t make you social, it’s a crutch.

Being social, funny, and interesting while sober is possible, he does it and has for almost 7 years so there’s no reason I can’t.

What do I drink now?

Club Soda (healthier than Tonic) to which I’ll add a splash of Cranberry, Grapefruit, or Pineapple juice; it’s healthy, looks like a drink so people don’t question why you’re always drinking water, and most bars/restaurants have the ingredients on hand.

From there, I enjoy the night.

I don’t have cravings or withdrawals even while hanging with others at the bar or parties as I see alcohol for what it is, a social crutch for some and addiction for the rest.

I don’t say or do stupid things, I don’t forget how my night ended, I never worry about who is driving, and I wake up hydrated and happy.

I’m not trying to convert anyone, but if you’re ready to drop the vice for good, don’t think there has to be a formal declaration through committing to AA or a rehab clinic.

(Some may need it, I’m not a medical professional so take care of yourself as you see fit knowing how long bad your addiction is)

You also don’t need to wait until something forces your hand.

Get proactive on this, break the cycle before it breaks you and forces you to make the decision to quit.