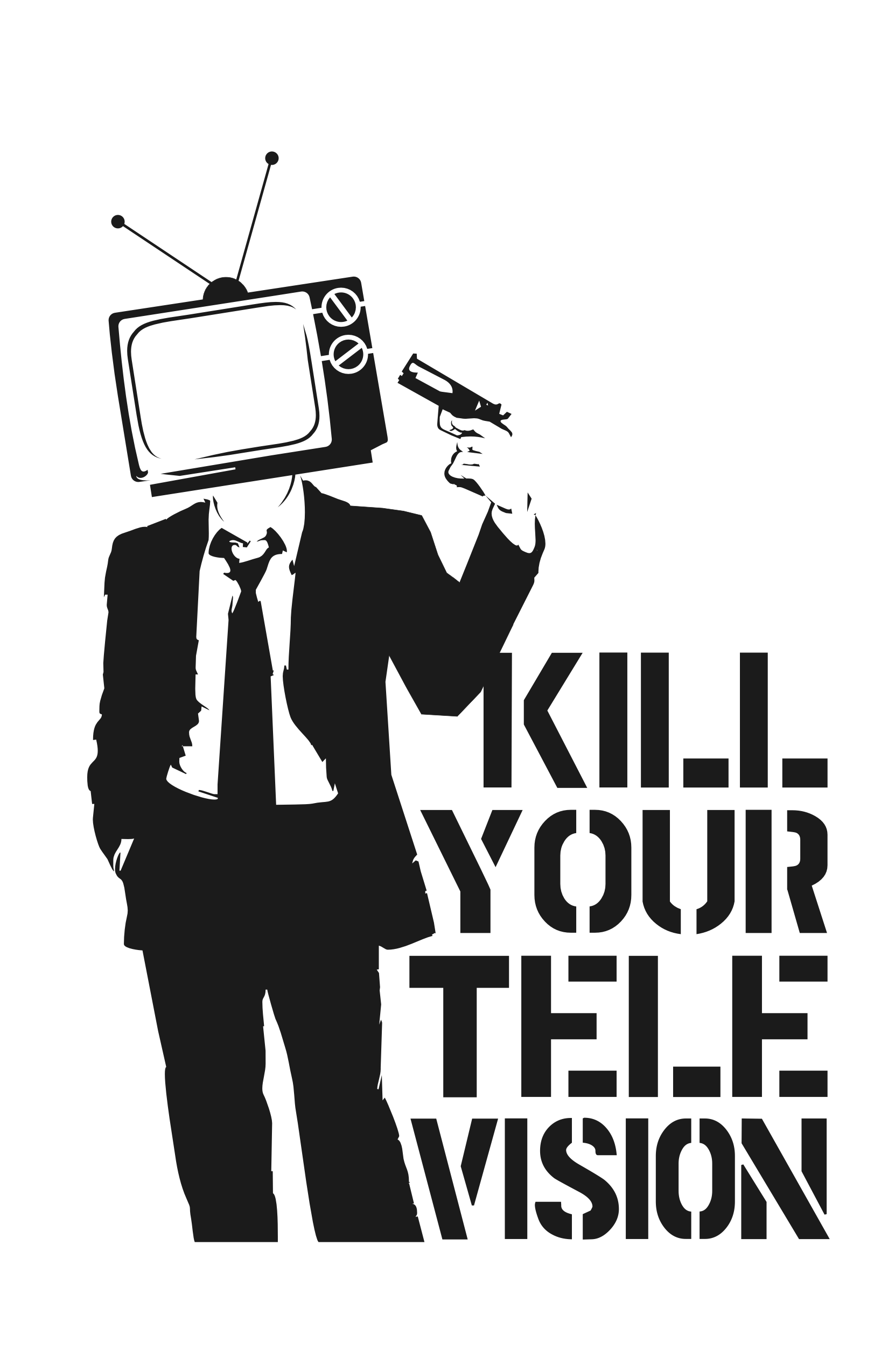 The television in your home is a portal for outside thoughts and influences to enter your inner “safe space“.

I want to push back against the “norm” of having the TV be the leading source of information and entertainment in you and your family’s life. The world can be a dark place; there’s no reason to bring that darkness into one’s home.

If there’s anywhere a person should be able to let loose and engage with individuals who want the absolute best for them it should be inside the home.

How does that work when the television, which is promulgating the most terrifying stress inducing content is running 24/7?

Why you should turn off the television

The TV is doing nothing but sharing content which it believes will scare you. I don’t say this as a tin-foil hat clown trying to spread conspiracies, it’s the truth.

The content on public TV is there to get you glued to the screen, it’s there to put you into a position you can’t look away.

Because hours watched equal $$$ and $$$ equals more power and influence which leads to more content and videos produced.

The TV wants you scared of viruses, economic slumps, Presidential scandals, and everything else in between.

You know what you aren’t seeing?

Think about that during the rest of this piece?

Is your TV making your kid(s) fat?

I wrote my Master’s thesis on Childhood Obesity.

The topic I selected was about the role television, smartphones, and tablets had on a child’s BMI and weight.

Do you realize that you’re conditioning your child’s relationship with screens from birth?

Parents are plugging their kids in front of screens and giving them tablets out of the womb, creating a generation of Tablet Toddlers (credit to Kyle Trouble). Think about this, the damn placenta is still warm and the kid has already figured out how to get to sesame street and angry birds.

Kids are fat and they are getting even fatter; screen time and processed foods are to blame, along with terrible parenting practices.

If I were to cite all of the studies which support my argument it would look like I copied an entire Britannica encyclopedia set and pasted it.

There are hundreds of resources out there, this isn’t just some theory; screens are making kids sedentary slugs.

The longer children sit glued in front of televisions and other forms of entertainment the higher their chances of being overweight throughout their life becomes.

Studies have been conducted that have directly connected television viewing and sedentary behavior to increased weight and a higher BMI.

With removing/limiting the amount of time a child has with sedentary activities (screen time) you will see a decrease in BMI and overall weight damn near immediately.

The longer it takes you to implement change, the more difficult it will be.

How to reduce your television consumption?

I recommend setting hard boundaries in the same fashion you do with your spouse. Draw the line at whatever your point is and enforce it when challenged.

I will only allow my kids TV if it is dark out and we decide to watch a movie as a family, if it is raining and they’ve already done their writing and school work, or if  New England sports are playing.

I read to my kids nightly, I play outside with them, I will sit and write with them or if they are painting I will read in the same room as them. I literally do all that I can to keep my family from being consumed by the TV.

It helps that we don’t have cable because, fuck that.

Jackie and I killed cable because we aren’t trying to keep up with the drones, you should consider doing the same.

I’ve gotten my family to where they don’t expect or rely on TV as a part of their normal routine. With all this work I still have to battle ‘screen time’.

When I visit my In-Laws or my own parents I go through the motions of reminding them I do not want the kids on electronics.

Gentlemen, if you have family members who think they’re being nice by giving the kids what they ask for, you can do one of two things.

My approach is the don’t ignore it.

I will tell my kids to wrap up what they are doing and then tell whoever gave it to them that when they are done that the phone, tablets, television are to be put away. I do not rip the shit out of my kids hands because they aren’t to blame.

They are kids, of course they will exploit that, I expect it.

Enforce boundaries and keep your kids away from screens for too long.

Do you know how many advertisements are created specifically with children in mind?

Companies are spending big bucks and literally studying child psychology in order to get inside our kid’s minds.

They want you to select their brand for breakfast, lunch, when you go out to eat, when you go on vacation, what clothes to wear, what games to buy, and what gifts are “cool“.

Do you ever look at your kid and wonder why they don’t appreciate the stuff they have?

If so, the answer is that the Television has brainwashed them from appreciating anything…

It’s always about, “What’s next…?” which prevents them from appreciating anything.

The next big thing is always being shoved into their little minds.

A Big Wheel is no longer good enough, you now need the big wheel with a radio, or this, or that always with something slightly ‘better’. If you want your kid to appreciate what life has to offer, then get them away from the incessant voice of advertisements.

Let them get away from the static noise and bright colors, let them get outside or lost in a book.

Let them create their own entertainment with G I Joes or dolls. Your kid’s mind is going to be fried if he is told that he needs to go buy something every 4 minutes.

Who is raising your child?

The picture above has become the “norm“.

Whenever I watch a movie or show I am deconstructing the interactions, reading covert body language, and analyzing the sexual and social dynamics between all of the characters.

I see my world through an “unplugged” lens.

I always pay attention to the themes and messages that are subtly (sometimes not so subtly) being delivered to the audience.

What sucks is you can’t turn this off, so when I sit down to watch a show or movie with the kids, I always walk away with a what the fuck head shake.

These shows are pushing the social justice politically correct message at every level.

When my kids were younger I watched some Sprout shows that talked about how winning wasn’t everything and that you don’t need to be competitive; we ended that.

I’ve watched Disney shows where the antagonist is always some man who is an all brawn oaf and the mighty petite princess is his equal then somehow stronger than him and beats him at whatever task (fucking Princess Sofia…).

The message of ‘boys are bad and do bad things‘ is constant.

If you think boys aren’t getting the message you underestimate the power of television.

Boys are being taught to repress who they are before they even really know who they are. This message can be delayed via removing TV and it’s impact will be mitigated if you invest time with your daughter and son and teach them about the differences between boys and girls.

The differences are emotional, physical, as well as mental yet parents are raising both kids the exact same.

I’m fair with both kids, but I am harder on my son and a little more strict with my daughter.

She rebounds faster than him yet requires a more direct approach. My son takes my criticism and uses it as fuel. It works for them, they are not the same and should not be treated the exact same.

Fathers on television have become the quintessential Beta-Bux, yet women can’t tell you they want the Alpha Fux so it is merely implied without being stated.

The fact that the father is an oaf, now that certainly is clearly delivered and expressed multiple times an episode.

I get it, a dad doing his job isn’t entertaining and a majority of the audience is women, they are the consumers therefore they get marketed to.

But, if your kids are watching this too, then they also see the dumb dads; again, don’t think the message is lost on them.

If you want your kids to know what dads are and what they are supposed to act like, be the living example.

Show your kids what fathers are supposed to be like through your actions.

TV dads are pathetic, TV ads are psychological warfare, sitting down to watch this crap all day makes you fat and on top of all that, there’s a constant message that the world is bad all the time.

Get outside with your kids and lead the family, don’t let the TV take your role.