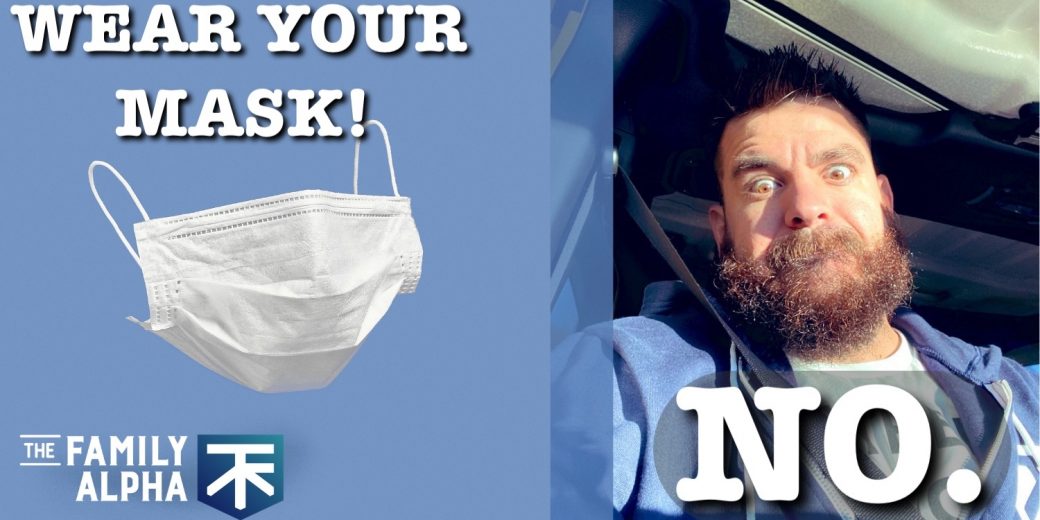 COVID-19 has changed our normal routine and placed new restrictions on what we can and cannot do.

Some of these guidelines are made up and in order to decide if you want to follow the rules or not, you must know whether the rules are legit or not;

Some rules are garbage and should be disregarded, not followed with blind allegiance.

In other words, stop accepting bullshit…

You accepted the masks.

Is there a point where everyone is collectively going to say, œENOUGH or have we accepted defeat?

The responses via DMs were in great contrast to those who responded publicly.

Privately, the DMs were consistent, “What can I do to push back against these mandates?“.

It’s great to see what once was fear turning into focus on reclaiming freedom and connection.

It’s good to know that there are more freedom fighters out there than we give credit.

In fact, there are a lot more men and women who want to fix this situation because they’ve had enough and currently, they’re just waiting for someone to show them what to do.

Here are three actions you can take immediately

PULL – I’ve worn masks when I’ve had to, some examples of this include:

Here’s the deal, these events I participated in were of higher priority than not wearing the mask.

I will not be the guy who doesn’t create memories with my kid on the field or misses conventions and events because I won’t fly due to the mask, the mask is not the hill I will die on, but I push the boundary to the extreme.

PUSH – I have one of those stretchy masks which go around your head, not the surgical type, I “forget” to put it on in every situation, too include the ones above, but also:

Do not err on the side of wearing this thing, in fact err on the side of having someone tell you to unfuck yourself. It’s okay for people to give you sideways looks and for as many Karens as you see on the News and Social Media, I find like-minded families flocking together.

In Alabama we did not wear our masks once.

We were there for 5 days and went to store, parks, restaurants, you name it. There were a handful of people wearing them and that’s fine, they felt more secure but they did not give an ounce of a shit about what we were doing, they’d talk to us without masks, and everyone just seemed to be so over it.

The thing is, if anyone thought this disease was as bad as it’s been stated, we’d know it by now. The reason people still have their kids in youth sports and are hanging out at Grandma’s house is because it’s bullshit.

Masks provide a false sense of security and heightened sense of anxiety.

People don’t have to be worried, yet the mask is the symbol that you’re supposed to be afraid. I wonder what the main difference is between Alabama where nobody cared and Rhode Island where they’re still sticklers…?

2. Don’t let the government tell you where you can go.

Who is the government to tell you that Nature is Closed?

We see parks with signs on them, gates closed, playgrounds with “Warnings” and I’m telling you right now, my family has disregarded all of it and our days have been better because of it.

I want you to stop looking for permission to live and instead to simply start living. The saying is true that sometimes it’s better to beg for forgiveness than it is to ask for permission.

Don’t break into buildings or anything like that, but let your kids on the playground that is off limits, let them go on the swings and hike the trails, who really believes that COVID is just waiting to get a kid sick at the park?

Wouldn’t we have seen that occurring and have proof before our eyes to counter my point?

After 8 months or however long it has been, we still don’t.

Stop bowing down and blindly following rules, get out there and get your family out there and start living like the free citizens that you are. The best leaders know when to break bullshit rules and if your family is having a hard time, it’s past time you stepped up and got them outdoors and back into the world, living.

3. Continue to gather with friends and family during quarantine.

Stop waiting for permission from the government to get together with your family, that’s an asinine position to take, especially in America.

There is absolutely no reason for you to miss holidays, events, funerals, and parties while protests are allowed and large public gatherings associated with politics is encouraged.

Do you truly believe that you need to keep less than 10 people from gathering in your home when 1,000 are getting together in town halls, attending rallies, and marching in the streets together?

Are you that much of a Goodie-Two-Shoes that you’ll miss making a memory with a loved one just so you’re in line with the guidance of a Governor who gives exactly ZERO shits about you and your family?

Start getting back together with friends and family.

Break from the fear of having 6 people together when you’re supposed to have 5 (REMINDER: These are made up numbers they’re throwing at us); have the courage to say enough!

Humans are pack animals and many of our fellow citizens of the world are struggling in isolation and need to connect before it’s too late. Get back to gathering with loved ones and making memories; come out of the Age of Corona better than you entered it.

It’s time we start reclaiming ownership over our freedoms and direction of our lives while in the same breadth, we make it clear what we’re willing and more importantly unwilling to tolerate from our “overlords“.

Remind them they work for you and that you are not a blind subject who’ll follow rules without question. Politicians are mere men and women, no greater or worse than you and I.

Live your life on your terms and watch how things don’t seem as bad as they once did.

That minor shift in perspective and giving yourself the freedom to choose and create your reality will have you in a much better headspace which will pass to your spouse, children, friends, etc.

Someone must stand and say enough, why not have that someone be you?

If you’d like to support my work, You may do so at any of the addresses below or via PayPal.

Thank you in advance.