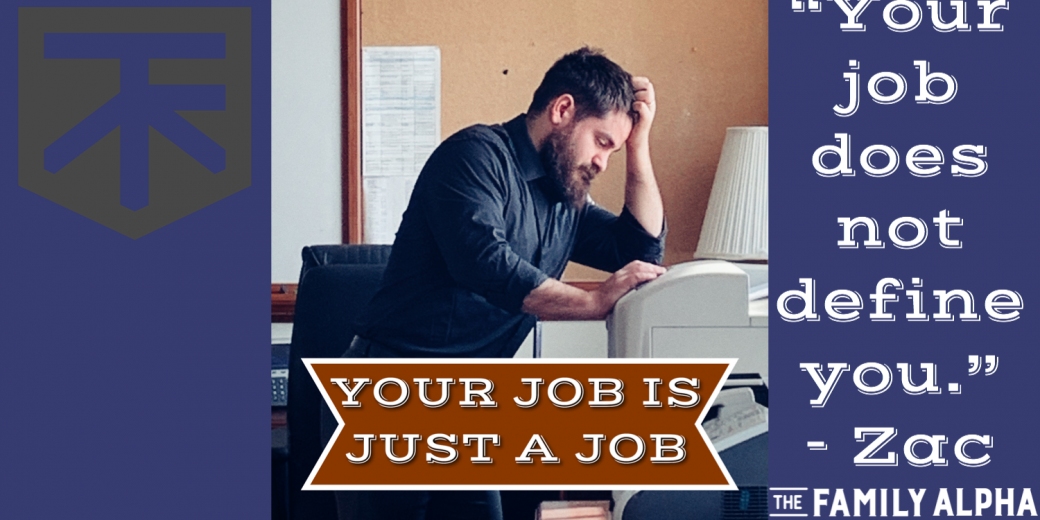 Your Job Does Not Define You.

I get some variation of, “Zac, I am struggling to find my area of passion in life and I’m losing self-respect and drive to chase my dreams because of my current job situation.”

PSA: The job you work at does not define the behaviors you exhibit in your home or in the pursuit of your life goals.

If you want to position your future self to live a life where there’s a great deal of satisfaction, minimal stress, and an increased sense of self-worth you’re going to have to stop thinking a change of job will do the trick and recognize that it’s going to take a change of heart.

How to break free from a job that’s shackled you down.

In fact, we have many men who’ve chosen to give their job their best and their family the rest.

In the Podcast above, my wife and I talk about how you are not defined by your job and how the first job you take after High-School or College is not the “permanent position” you’re meant to fill in life.

Men who try to self-sacrifice their way to professional success often have poor relationships with their wives, their kids, and themselves.

I’ve worked with men who felt exactly the same way whether:

‹This isn’t a case of class of job = class of man because it isn’t the job itself which makes the man.

‹Wearing a suit to work doesn’t make you any more of a man than if you were to be digging trenches daily in overalls.

The respect given to a man is based upon the merit of his character, not his paycheck.

‹I know businessmen who are controlled and in fear of their wives while being disrespected by their children; I also know men making minimum wage who lead their family to the greatest of heights.

Your self-worth is not defined by your job.

Now, if you’re looking to grow your skill-sets and enter a different work arena, well that’s a different approach and I’ll use my father as an example.

To be blunt, you have to be willing to do the grunt work and earn your place in the hierarchy.

My Dad was a Nuclear Engineer in the Navy, worked for Intel, went to school to become a Pilot, is almost done with his degree, and wants to use that to become a dispatcher/air controller for Delta.

Where did he choose to start?

By getting his foot in the door checking bags.

He plans to build up from there.

Is he over qualified?

He knows that Delta promotes primarily from within and it’s his aim to get in the door, destroy the competition, and rise the ranks.

He’s instilled this same value in myself and it’s a life lesson which has served me and my family well.

How to juggle all of life’s responsibilities

Getting to the point where writing and speaking became my full-time gig was no easy task; it didn’t “just happen“.

Everything I’d do was on top of:

Your job does not define you

I was a paper pusher and while I didn’t belong in that office, (I was an Engineer in the Navy and male working with 2 women for most of my time) I never allowed the job to define me, it was simply something needed to pay the bills.

You doing manual labor is just a job and something that pays the bills while you plan your next move.

That means polishing the resume, finding different ways to promote your skill-sets to get a different position in a different field, networking, spending nights using the glorious thing called the internet to figure out the ins/outs of the field you’re trying to crack into.

There’s no reason you should allow your job to define who you are as a man.

All of this presents itself to you, but if you still think a bigger paycheck or more “respected” profession will bring inner peace, you are wrong.

You need to respect yourself, regardless of what your job title is.

Nobody will remember that you wore that suit M-F, they’ll remember the type of man you were outside the office.

The focus should be on looking at the man in the mirror and getting to respect him more-so than hoping a change of job will lift the weight from your mind.

Once you do that, you won’t let the fear of the unknown keep you from taking the leap into something new, you’ll have the irrational confidence needed to say that no matter what, “you’ll be alright“.